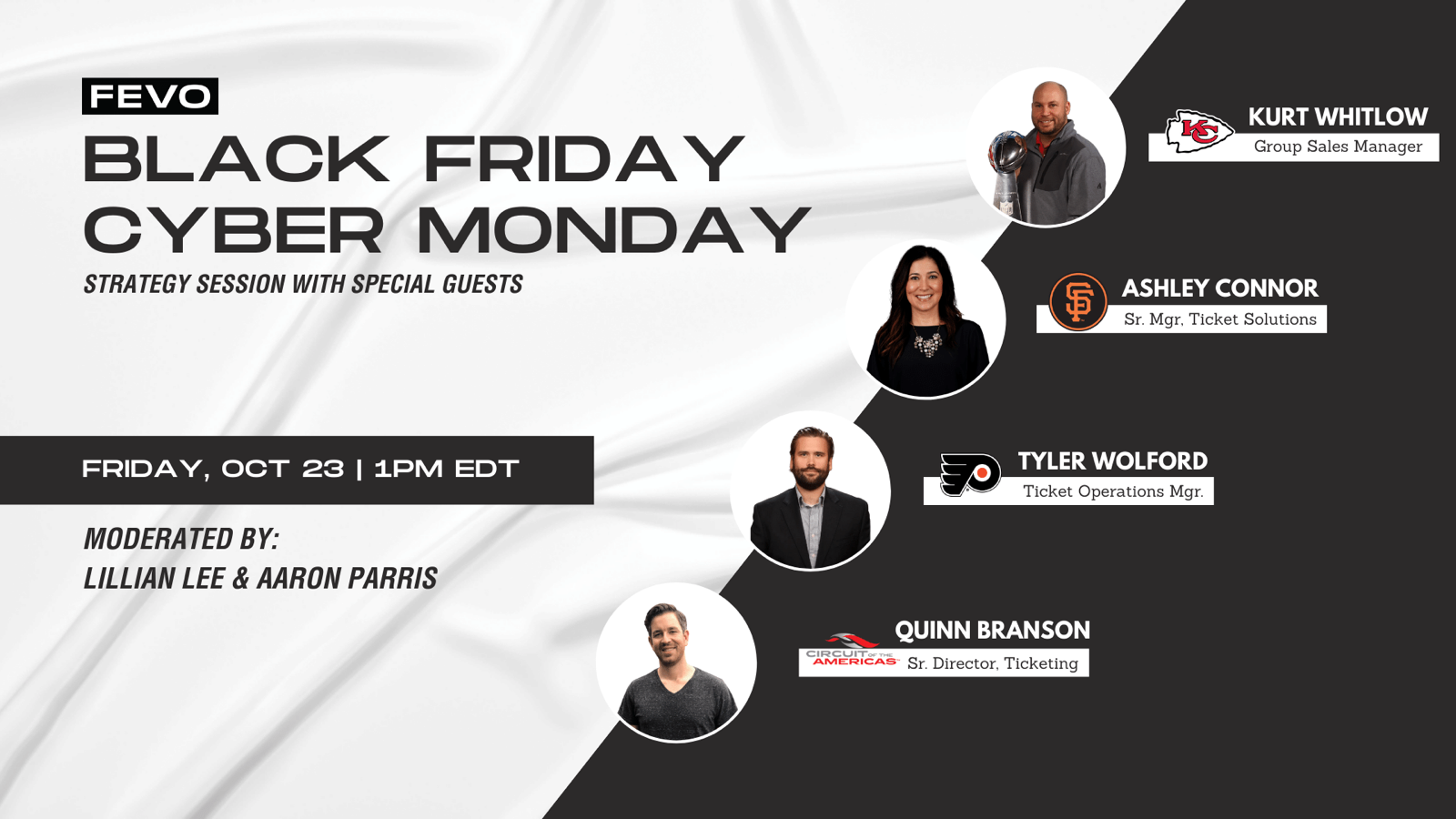 With the holiday season fast approaching -- and in-store retail shopping still complicated to navigate -- engaging consumers digitally has never been more important. Hear from several leaders in the sports and entertainment space speak on how they each use FEVO as part of their holiday digital strategy to maximize their revenue generation during the busiest shopping period of the year.

Bio: Kurt has been with the Super Bowl LIV Champion Kansas City Chiefs for 12 years, seven of which as the Group Sales Manager. Prior to working at the Chiefs, Kurt was the Ticket  Manager/Director of Advertising and Merchandise at the USHL’s Des Moines Buccaneers for two and a half years.

At the Chiefs, he oversees the day-to-day operations of the Group Team, which has consistently hit their annual Group Sales Goal and set revenue records the last 3 years in a row. Outside of work, Kurt enjoys spending time with his family/dogs/friends, traveling and watching the Iowa State Cyclones! GO STATE!

Bio: After 10 years with Tickets.com Ashley received her call up to the Majors in 2014. With a focus on operational efficiencies, she leads the Ticket Operations team in SF and is responsible for leveraging strategic solutions that foster fan growth and development.

Bio: Quinn is the Sr. Director of Ticket Operations for Circuit of The Americas, guiding events such as Formula 1, MotoGP, INDYCAR, USL Soccer, ESPN X Games, and national-touring concerts. Before joining the motorsports world, he held ticketing roles with FC Dallas and SMU Athletics. When not at an event, he’s either playing soccer or with his wife, daughter, and rescue animals in Austin, Texas.

Bio: Tyler Wolford is the Ticket Operations Manager for the Philadelphia Flyers. Tyler handles all the back end ticket operations setup and manifest changes along with setting up promotions and discounts. Tyler previously ran the Box Office at the Cure Auto Insurance Arena in Trenton NJ for 9 years before joining the Flyers in 2016. He graduated from York College of PA in 2006 with a major in Sports Management and Minor in HR.

Bio: Lillian is FEVO’s Digital Marketing expert focused on digital platforms, digital media, tagging strategy, and marketing analytics and comes from an extensive background in live events. From graduating NYU with a Music Business degree, performing on stage, producing and promoting events, to leading Front Gate Tickets’ digital marketing team supporting their music festival roster, her behind-the-scenes and hands-on experiences give her a unique edge on hitting big picture goals with a data-driven and detailed approach.

Bio: Aaron is in his second year as Executive Vice President for Partner Success with FEVO. Prior to FEVO, Aaron served as the Associate Athletic Director for Revenue Generation at the University of Arkansas, where he helped the Razorbacks record revenue records in both of his two years in Fayetteville.  Before Arkansas, Parris oversaw Ticket Sales & Operations efforts at Southern Methodist University, Marquette University, and at his Alma Mater, the University of Kansas. Parris has an undergraduate degree in Sports Management from the University of Kansas and his Masters in Sports Administration from Arizona State University.  Aaron and his wife Ally have 3 boys, Hudson (7), Max (5), & Rhett (2).

The rich text element allows you to create and format headings, paragraphs, blockquotes, images, and video all in one place instead of having to add and format them individually. Just double-click and easily create content.

How to customize formatting for each rich text

Headings, paragraphs, blockquotes, figures, images, and figure captions can all be styled after a class is added to the rich text element using the "When inside of" nested selector system.